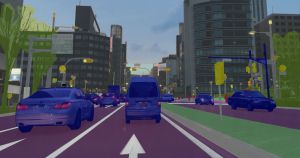 Google Maps might be detailed enough to help you find a new restaurant, but if you want your car to autonomously drive you to dinner, it’s going to need a map that’s far more accurate.

Now a startup with the punny name Mapillary thinks it’s figured out the best way to generate that map.

Mapillary says it’s using a combination of crowdsourcing and artificial intelligence to create constantly updated, highly accurate maps of the world’s roadways, complete with minutiae like road signs and driveways — the kind of maps needed to bring self-driving cars to the mainstream.

Mapillary contributors upload photos of streets, driveways, and other objects a self-driving car might encounter. The company’s computer-vision software then analyzes the photos, noting the coordinates of everything from utility poles to manhole covers.

Commercial customers must pay a licensing fee to access Mapillary’s highly detailed maps, but they’re free to charities or anyone using them for educational or personal use.

As for how the company manages to keep people invested in contributing, it holds periodic mapping challenges, with the winners scoring prizes. It also maintains a leaderboard of the people who’ve contributed the most images, for those users for whom bragging rights are enough incentive.

Since its founding in 2013, Mapillary has collected 422 million images from 190 countries, mapping more than 3.9 million miles of road. Because it’s updated constantly, unlike a platform such as Google Maps, it’s ideal for self-driving vehicles.

“Driverless cars need the latest view of the road,” CEO Jan Erik Solem told MIT Technology Review. “They require a higher and higher update frequency for maps, from quarterly to monthly to weekly to daily. The only scalable way to do that is using technology.”

More on self-driving cars: Companies Race to Dominate the World of Maps for Driverless Cars

The post This Startup Is Crowdsourcing Special Maps for Self-Driving Cars appeared first on Futurism.

Microsoft Ignite 2019: all the news from Microsoft’s enterprise IT event