At the center of our galaxy resides a Supermassive Black Hole (SMBH) known as Sagittarius A. Based on ongoing observations, astronomers have determined that this SMBH measures 44 million km (27.34 million mi) in diameter and has an estimated mass of 4.31 million Solar Masses. On occasion, a star will wander too close to Sag A and be torn apart in a violent process known as a tidal disruption event (TDE).

These events cause the release of bright flares of radiation, which let astronomers know that a star has been consumed. Unfortunately, for decades, astronomers have been unable to distinguish these events from other galactic phenomena. But thanks to a new study from by an international team of astrophysicists, astronomers now have a unified model that explains recent observations of these extreme events.

The study – which recently appeared in the Astrophysical Journal Letters under the title “A Unified Model for Tidal Disruption Events” – was led by Dr. Jane Lixin Dai, a physicist with the Niels Bohr Institute’s Dark Cosmology Center. She was joined by members from University of Maryland’s Joint Space-Science Institute and the University of California Santa Cruz (UCSC). 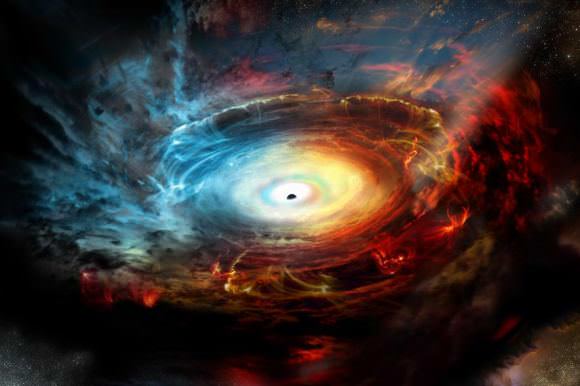 Illustration of the supermassive black hole at the center of the Milky Way. Credit: NRAO/AUI/NSF

As Enrico Ramirez-Ruiz – the professor and chair of astronomy and astrophysics at UC Santa Cruz, the Niels Bohr Professor at the University of Copenhagen, and a co-author on the paper – explained in a UCSC press release:

“Only in the last decade or so have we been able to distinguish TDEs from other galactic phenomena, and the new model will provide us with the basic framework for understanding these rare events.”

In most galaxies, SMBHs do not actively consume any material and therefore do not emit any light, which distinguishes them from galaxies that have Active Galactic Nuclei (AGNs). Tidal disruption events are therefore rare, occurring only once about every 10,000 years in a typical galaxy. However, when a star does get torn apart, it results in the release of an intense amount of radiation. As Dr. Dai explained: Illustration of emissions from a tidal disruption event shows in cross section what happens when the material from a disrupted star is devoured by a black hole. Credit: Jane Lixin Dai

In the past few years, a few dozen candidates for tidal disruption events (TDEs) have been detected using wide-field optical and UV transient surveys as well as X-ray telescopes. While the physics are expected to be the same for all TDEs, astronomers have noted that a few distinct classes of TDEs appear to exist. While some emit mostly x-rays, others emit mostly visible and ultraviolet light.

As a result, theorists have struggled to understand the diverse properties observed and create a coherent model that can explain them all. For the sake of their model, Dr. Dai and her colleagues combined elements from general relativity, magnetic fields, radiation, and gas hydrodynamics. The team also relied on state-of-the-art computational tools and some recently-acquired large computer clusters funded by the Villum Foundation for Jens Hjorth (head of DARK Cosmology Center), the U.S. National Science Foundation and NASA.

Using the model that resulted, the team concluded that it is the viewing angle of the observer that accounts for the differences in observation.  Essentially, different galaxies are oriented randomly with respect to observers on Earth, who see different aspects of TDEs depending on their orientation. As Ramirez-Ruiz explained:

“It is like there is a veil that covers part of a beast. From some angles we see an exposed beast, but from other angles we see a covered beast. The beast is the same, but our perceptions are different.”

In the coming years, a number of planned survey projects are expected to provide much more data on TDEs, which will help expand the field of research into this phenomena. These include the Young Supernova Experiment (YSE) transient survey, which will be led by the DARK Cosmology Center at the Niels Bohr Institute and UC Santa Cruz, and the Large Synoptic Survey Telescopes (LSST) being built in Chile.

According to Dr. Dai, this new model shows what astronomers can expect to see when viewing TDEs from different angles and will allow them to fit different events into a coherent framework. “We will observe hundreds to thousands of tidal disruption events in a few years,” she said. “This will give us a lot of ‘laboratories’ to test our model and use it to understand more about black holes.”

This improved understanding of how black holes occasionally consume stars will also provide additional tests for general relativity, gravitational wave research, and help astronomers to learn more about the evolution of galaxies.

The post This is What Happens When a Black Hole Gobbles up a Star appeared first on Universe Today.

Scholar to talk about role of science in law

Australia keeps telco data longer than all but three countries