On this day, April 12th, in 1961, the first human being broke free of the gravity bond with Earth, and orbited the planet.Though most everyone is familiar with the American Apollo astronauts who walked on the Moon, what it took to get there, and the “One small step…” of Neil Armstrong, fewer people are familiar with Yuri Gagarin, the Soviet cosmonaut who was the first human in space. He orbited Earth in his Vostok 1 spacecraft for 108 minutes.Gagarin became an international celebrity at the time. He received the USSR’s highest honor, the Hero of the Soviet Union. Quite an honor, and quite an achievement for someone who, as a child, survived the Nazi occupation of Russia by living in a tiny mud hut with those members of his family who were not deported for slave labour by the Germans.The Space Race between the USA and the USSR was in full swing at the time of Gagarin’s flight, and only one month after Gagarin’s historic journey, American astronaut Alan Shepard reached space. But Shepard’s journey was only a 15 minute sub-orbital flight.Gagarin only has one space flight to his credit, aboard the Vostok 1 in 1961. He did serve as back-up crew for the Soyuz 1 mission though. Gagarin was a test pilot before becoming a cosmonaut, and he died while piloting a Mig-15 fighter jet in 1968.Space travel in our age is full of ‘firsts.’ It’s the nature of our times. But there can only ever be one first person to leave Earth, and that accomplishment will echo down the ages. Scores of people have been into space now. Their accomplishments are impressive, and they deserve recognition.But this day belongs to Yuri Gagarin.

The post This Day In 1961: The First Human Into Space appeared first on Universe Today. 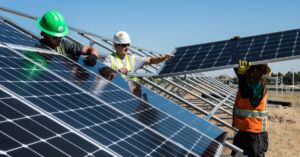 Is Solar Worth It in 2021? This Free Service Has the Answer.