For us Earthlings, life under a single Sun is just the way it is. But with the development of modern astronomy, we’ve become aware of the fact that the Universe is filled with binary and even triple star systems. Hence, if life does exist on planets beyond our Solar System, much of it could be accustomed to growing up under two or even three suns. For centuries, astronomers have wondered why this difference exists and how star systems came to be.

Whereas some astronomers argue that individual stars formed and acquired companions over time, others have suggested that systems began with multiple stars and lost their companions over time. According to a new study by a team from UC Berkeley and the Harvard-Smithsonian Center for Astrophysics (CfA), it appears that the Solar System (and other Sun-like stars) may have started out as binary system billions of years ago.

This study, titled “Embedded Binaries and Their Dense Cores“, was recently accepted for publication in the Monthly Notices of the Royal Astronomical Society. In it, Sarah I. Sadavoy – a radio astronomer from the Max Planck Institute for Astronomy and the CfA – and Steven W. Stahler (a theoretical physicist from UC Berkeley) explain how a radio surveys of a star nursery led them to conclude that all Sun-like stars began as binaries. They began by examining the results of the first radio survey of the giant molecular cloud located about 600 light-years from Earth in the Perseus constellation – aka. the Perseus Molecular Cloud. This survey, known as the VLA/ALMA Nascent Disk and Multiplicity (VANDAM) survey, relied the Very Large Array in New Mexico and the Atacama Large Millimeter/submillimeter Array (ALMA) in Chile to conduct the first survey of the young stars (<4 million years old) in this star-forming region.

For several decades, astronomers have known that stars are born inside “stellar nurseries”, which are the dense cores that exist within immense clouds of dust and cold, molecular hydrogen. These clouds look like holes in the star field when viewed through an optical telescope, thanks to all the dust grains that obscure light coming from the stars forming within them and from background stars.

Radio surveys are the only way to probe these star-forming regions, since the dust grains emit radio transmissions and also do not block them. For years, Stahler has been attempting to get radio astronomers to examine molecular clouds in the hope of gathering information on the formation of young stars inside them. To this end, he approached Sarah Sadavoy – a member of the VANDAM team – and proposed a collaboration.

The two began their work together by conducting new observations of both single and binary stars within the dense core regions of the Perseus cloud. As Sadavoy explained in a Berkeley News press release, the duo were looking for clues as to whether young stars formed as individuals or in pairs: Their observations of the Perseus cloud revealed a series of Class 0 and Class I stars – those that are <500,000 old and 500,000 to 1 million years old, respectively – that were surrounded by egg-shaped cocoons. These observations were then combined with the results from VANDAM and other surveys of star forming regions – including the Gould Belt Survey and data gathered by SCUBA-2 instrument on the James Clerk Maxwell Telescope in Hawaii.

From this, they created a census of stars within the Perseus cloud, which included 55 young stars in 24 multiple-star systems (all but five of them binary) and 45 single-star systems. What they observed was that all of the widely separated binary systems – separated by more than 500 AU – were very young systems containing two Class 0 stars  that tended to be aligned with the long axis of their egg-shaped dense cores.

Meanwhile, the slightly older Class I binary stars were closer together (separated by about 200 AU) and did not have the same tendency as far as their alignment was concerned. From this, the study’s authors began mathematically modelling multiple scenarios to explain this distribution, and concluded that all stars with masses comparable to our Sun start off as wide Class 0 binaries. They further concluded that 60% of these split up over time while the rest shrink to form tight binaries.

“As the egg contracts, the densest part of the egg will be toward the middle, and that forms two concentrations of density along the middle axis,” said Stahler. “These centers of higher density at some point collapse in on themselves because of their self-gravity to form Class 0 stars. “Within our picture, single low-mass, sunlike stars are not primordial. They are the result of the breakup of binaries. ” The two brightest stars of the Centaurus constellation, the binary star system of Alpha and Beta Centauri. Credit: Wikipedia Commons/Skatebiker

Findings of this nature have never before been seen or tested. They also imply that each dense core within a stellar nursery (i.e. the egg-shaped cocoons, which typically comprise a few solar masses) converts twice as much material into stars as was previously thought. As Stahler remarked:

“The key here is that no one looked before in a systematic way at the relation of real young stars to the clouds that spawn them. Our work is a step forward in understanding both how binaries form and also the role that binaries play in early stellar evolution. We now believe that most stars, which are quite similar to our own sun, form as binaries. I think we have the strongest evidence to date for such an assertion.”

This new data could also be the start of a new trend, where astronomers rely on radio telescopes to examine dense star-forming regions with the hopes of witnessing more in the way of stellar formations. With the recent upgrades to the VLA and the Atacama Large Millimeter/submillimeter Array (ALMA) in Chile, and the ongoing data provided by the SCUBA-2 survey in Hawaii, these studies may be coming sooner other than later.

Another interesting implication of the study has to do with something known as the “Nemesis hypothesis”. In the past, astronomers have conjectured that a companion star named “Nemesis” existed within our Solar System. This star was so-named because the theory held that it was responsible for kicking the asteroid which caused the extinction of the dinosaurs into Earth’s orbit. Alas, all attempts to find Nemesis ended in failure. 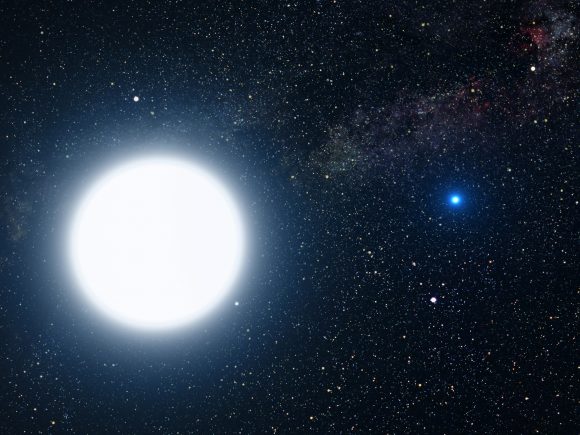 As Steven Stahler indicated, these findings could be interpreted as a new take on the Nemesis theory:

“We are saying, yes, there probably was a Nemesis, a long time ago. We ran a series of statistical models to see if we could account for the relative populations of young single stars and binaries of all separations in the Perseus molecular cloud, and the only model that could reproduce the data was one in which all stars form initially as wide binaries. These systems then either shrink or break apart within a million years.”

So while their results do not point towards a star being around for the extinction of the dinosaurs, it is possible (and even highly plausible) that billions of years ago, the Solar planets orbited around two stars. One can only imagine what implications this could have for the early history of the Solar System and how it might have affected planetary formation. But that will be the subject of future studies, no doubt!

The post The Sun Probably Lost a Binary Twin Billions of Years Ago appeared first on Universe Today.