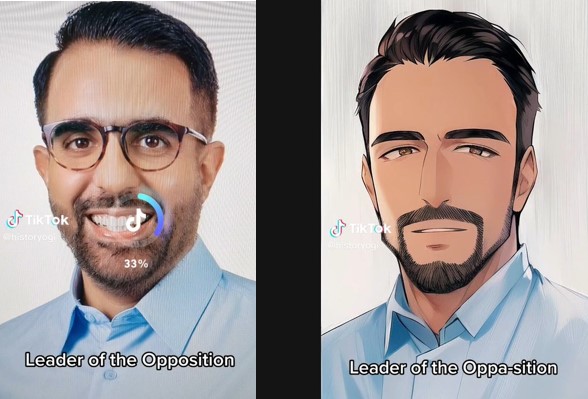 An online user has generated a video wherein Workers’ Party secretary-general Pritam Singh has gotten a digital makeover, turning the leader of the opposition into the leader of the… “oppa-sition”.

It’s not every day you see a manga version of the leader of the opposition. Well, many Singaporeans were given the opportunity to see what Mr Singh would look like if he were an anime character after an online user used a social media platform’s visual effect on one of his photos.

“Leader of the oppa-sition,” the text reads on the screen when Mr Singh’s manga version is shown. The Korean term oppa is one of endearment, which directly translates to “elder brother” or “big brother”.

In response to the video, which was shared on various social media platforms, many shared their thoughts on the animated version of Mr Singh in the comments sections. While a few weren’t big fans, others seemed to like it a lot.

“Man doesn’t even look Indian anymore,” wrote one netizen, “but whatever kids are into these days, I guess.” Another called Mr Singh “Opaaaaaaa!”

“Bruh, it matches like 99%” yet another said, while one joked that the video was made as a “new marketing campaign.” One commenter made a request for the person who uploaded the video to do one of Mr Singh’s fellow Workers’ Party members, Jamus Lim.

The video, which is only four seconds long, has garnered almost 19 thousand views on TikTok.

In the sweltering heat, Singapore and US soldiers build camaraderie

Private home prices up 0.6 per cent in April