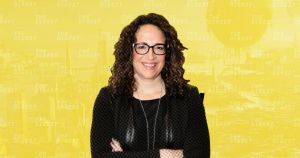 The post-apocalyptic Australian wasteland of “Mad Max.” The wholesome space utopia of “Star Trek.” The eugenicist, gene-hacking society of “Gattaca.”

When film and television creators envision future worlds, it’s not just an exercise in special effects. It’s also an opportunity to reflect on the futures to which our present moment could lead. That was one challenge that the creators of Hulu’s upcoming sci-fi series “The First,” which dramatizes a human mission to Mars in the 2030s, had to deal with — they didn’t just want to depict an accurate Red Planet. They also wanted to show the life on that future Earth that the protagonists were leaving behind.

For that task, they consulted with New York University business professor and noted futurist Amy Webb. In a new interview with Marketplace, Webb described how she anticipated what life in the show’s future might look like: she took a hard look at the present.

Webb’s primary directive, she said, is to dream up technology that allows us to understand how characters in the future live their lives, but that doesn’t take center stage. In “The First,” that meant that smart phones have become passé, replaced by ubiquitous smart glasses and earpieces that facilitate communication.

“[I]f anything the technology shouldn’t be something that people are focusing on as they’re watching the show,” Webb told interviewer Molly Wood. “It should be more like, ‘Oh, ok. That makes sense.’ And then they go back to the stories of the characters.”

Webb doesn’t believe it’s possible to predict exactly what the future will hold. Instead, she envisions ways that the present could lead to different futures. That’s a compelling way to look not just at TV, but also many of our policy and business decisions that will inform the role today’s technologies, from social media to killer robots, will play in our own future.

READ MORE: When Hollywood producers need to get the future right, they call a futurist [WIRED]

More on Mars: It’s Official. Humans Are Going to Mars. NASA Has Unveiled Their Mission.

The post It’s This Woman’s Job To Dream Up Hollywood’s Sci-Fi Future appeared first on Futurism.

Criminals love cryptocurrencies. Should you?