For years, scientists have been hunting for the stable lava tubes that are believed to exist on the Moon. A remnant from the Moon’s past, when it was still volcanically active, these underground channels could very well be an ideal location for lunar colonies someday. Not only would their thick roofs provide naturally shielding from solar radiation, meteoric impacts, and extremes in temperature. They could also be pressurized to create a breathable environment.But until now, evidence of their existence has been inferred from surface features such as sinuous rilles – channel-like depressions that run along the surface that indicate the presence of subterranean lava flows – and holes in the surface (aka. “skylights”). However, recent evidence presented at the 47th Lunar and Planetary Science Conference (LPSC) in Texas indicates that one such stable lava tube could exist in the once-active region known as Marius Hills.

The presentation was led by Rohan Sood, a graduate research assistant from the department of Aeronautics and Astronautics at Purdue University in Indiana. For some time now, Sood and his research colleagues have been examining data obtained from NASA’s twin Gravity Recovery and Interior Laboratory (GRAIL) mission in order to get a better sense of what the Moon’s interior looks like.

Launched in 2011, the purpose of the GRAIL mission – which consists of two orbiters, Ebb and Flow, working in tandem – was to map the Moon’s gravity with extreme precision. Over time, the information it gathered has provided scientists with the opportunity to gain a better understanding of the Moon’s subsurface features, particularly the buried lava tubes that are believed to exist.

In 2009, the Japan Aerospace Exploration Agency’s (JAXA) Kaguya spacecraft (aka. Selene) confirmed the presence of a skylight in the Marius Hills region, which has since come to be known as the “Marius Hole”. In 2011, it was photographed in more detail by the Lunar Reconnaissance Orbiter, which showed that it was approximately 65 meters wide and 80 meters deep. The fact that this hole sat between two rilles indicated that it was evidence that lava once flowed beneath the region.Using the GRAIL gravity data that was collected at different altitudes, the Purdue team went about assessing the presence and extent of ancient lava tubes beneath the surface of Marius Hills. What they determined was rather interesting. As Sood told Universe Today via email:

“Thanks to NASA’s GRAIL mission, we now have derived the lunar gravity field to an unprecedented resolution and accuracy. The data allows us to dig below the lunar surface, with our objective being to recognize signatures that may correspond to those of empty lava tubes.”

To assess the possibility of lava tubes, Sood and his team relied on a two-tiered strategy of gradiometry and cross-correlationon specific regions. Whereas gradiometry calculates the gravitational potential from a spherical harmonics data set, cross-correlation utilizes the individual track data based on the relative acceleration between the two spacecraft as they move along their respective orbits.Much like Earth, the moon’s gravitational field is affected by masses below the surface. “Any gravitational field is affected by the density of material,” said Sood. “If you are flying the spacecraft over a block of dense material, it will experience an increase in gravitational pull in contrary to flying over a lava tube void, in which case there will be a decrease in gravitational attraction experienced by the spacecraft.”Where the Marius Hole is located, the team spotted a gravitational signature that was indicative of a subsurface cavity. But that was not all. Distributed across the Moon’s near side, Sood and his colleagues also noted that the GRAIL data indicated at least ten signatures that could resemble lava tubes. All are located near the dark areas left by ancient volcanic seas, with some measuring more than 100 km long and several kilometers wide.Naturally, there are some doubts as to whether or not the readings are indicative of actual lava tubes. As the team indicated in their paper – “Detection of Buried Empty Lunar Lava Tubes Using Grail Gravity Data“, which contains the findings they presented at the 47th Lunar and Planetary Science Conference – the structures they were looking for were similar or smaller in scale than the resolution of the gravity data.As a result, it was difficult to determine whether or not the signals they spotted were in fact a sign of an underground recess, or a numerical artifact in the data. Because of this, proving the existence of stable, subsurface lava tubes will require a next-generation mission, one that has instruments which will be able to penetrate the lunar surface and confirm the presence of recesses.”[W]e have to remember that gravity is non-unique,” Sood added, “which means, in order to support our findings and to add to our ongoing efforts, our team is considering a ground penetrating radar that will probe the lunar subsurface from orbit. The goal of the radar would be to confirm the presence of the potential lava tube candidates that we have detected so far, and in addition, look for smaller lava tubes that were beyond the resolution of GRAIL gravity data.”One possibility is a concept Sood and his colleagues have proposed themselves – the Lunar Advanced Radar Orbiter For Subsurface Sounding (LAROSS) mission. Designed to build upon the success of the GRAIL mission, the concept calls for a spacecraft equipped with ground-penetrating radar to conduct a sounding mission that would potentially confirm both the presence and size of the Moon’s buried empty lava tubes.This is not the first time that researchers from Purdue have presented a case for stable lunar lava tubes at the Lunar and Planetary Science Conference. Last year, at the 46th annual conference, a research team from the Department of Earth, Atmospheric and Planetary Sciences (which included Sood) used data similarly provided by the GRAIL mission to determine that some lunar lava tubes could measure up to 1 km in width.These latest findings, which not only produced more evidence of such subsurface spaces, but indicated that they may be even larger than previously expected, is good news for advocates of lunar settlement. It is also worth noting that since it began surveying the moon, the Lunar Reconnaissance Orbiter has imaged over 200 pits that show signs of being skylights.Each of these holes could lead to subsurface voids or caverns, which range in diameter from about 16 feet (5 meters) to more than 2,950 feet (900 m). Assuming that just a fraction of these lead to underground tubes that are large enough to house an entire Earth city, there would be no shortage of possible settlement sites if and when it comes time to colonize the Moon.After all, one of the biggest challenges in settling on a body where there is no atmosphere to speak of is creating a sturdy and airtight protective shelter. Another major challenge is shielding the occupants of these and other shelters from incoming cosmic rays and solar radiation since their is no ozone layer to filter them out.Where better than in an underground tunnel that will not only shield inhabitants from harmful radiation, meteoric impacts, and extremes in temperature, but also has immensely thick walls to keep the air in? In all likelihood, if and when there is such a thing as “Lunies”, they will dwell in elongated caverns beneath the Moon’s surface.Further Reading: Universities Space Research Assocation 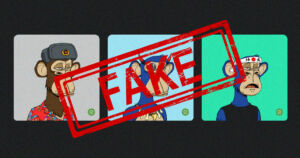 Scammer Steals Apes Worth $500,000 by Photoshopping Checkmark Onto JPG