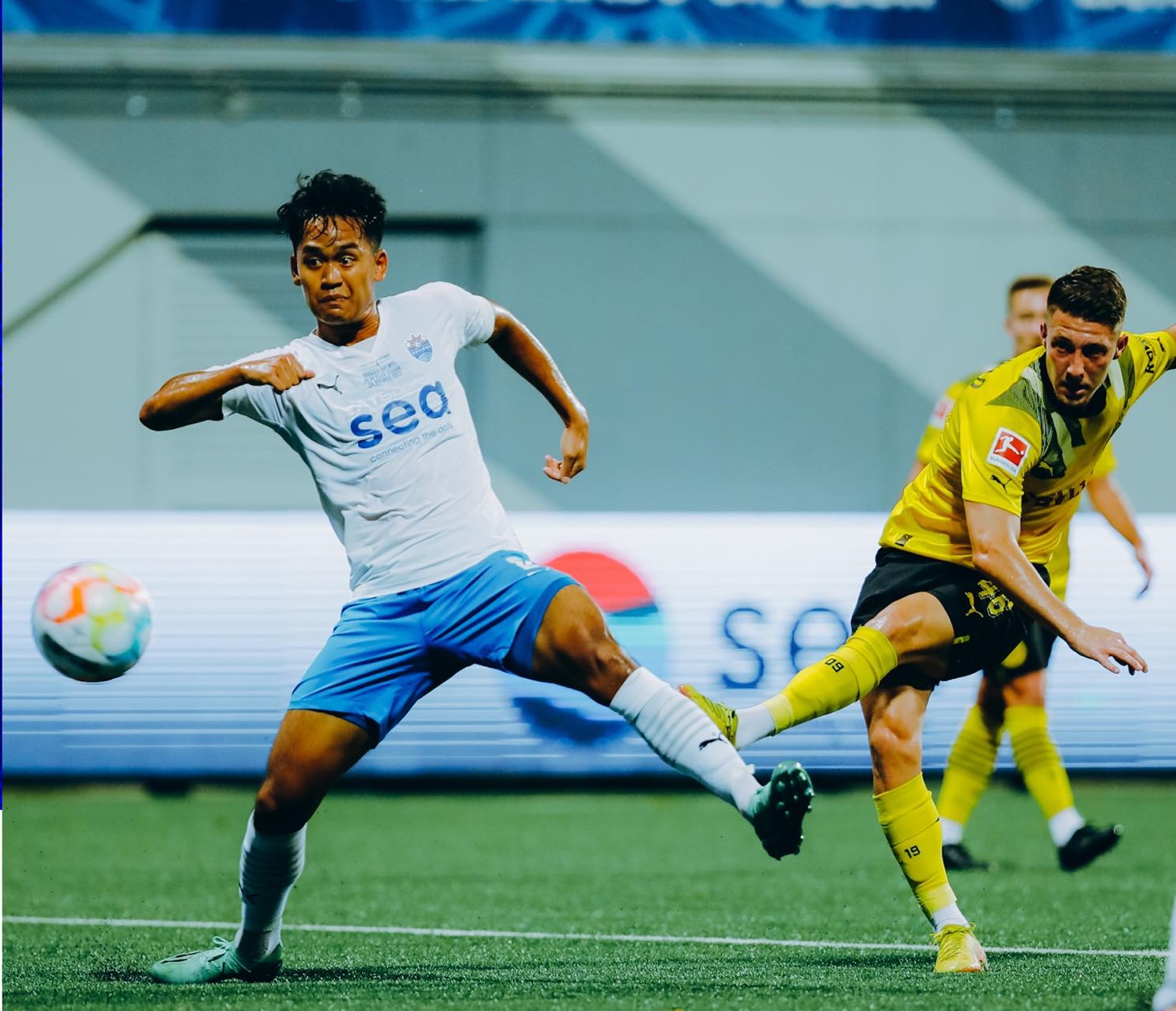 Despite playing without many of their key players who are on international duty at the 2022 FIFA World Cup, Borussia Dortmund cruised to an emphatic 7-2 victory over 2021 Singapore Premier League champions Lion City Sailors at a sold-out Jalan Besar Stadium on Thursday night.

Defender Mat Hummels was seen interacting with fans and obliging their request for autographs before the kick-off but did not feature in the match, as head coach Malen handed the captain’s armband to Emre Can.

Club captain Marco Reus travelled with the squad to Singapore but also did not feature in the match as he is still recovering from an ankle injury that he initially sustained in a Bundesliga match against Schalke in September. He returned to action for the club in October but was back on the treatment table immediately after the match.

For head coach Edin Terzic, he was pleased with what his team had shown on the field and is glad that no players require any serious medical attention and add to his club’s injury list. “It was quite an intense game and we are very happy with the performance. The spectators left the stadium happy as well to see nine goals. It is good that many of our young players had the opportunity to get some game time,” said Terzic.

“So we are really happy with no injuries, that is most important for us. We showed a professional game. Scored seven goals and conceded two and that is what we are going to work on.”

Although the German club had several Under-23 and Under-19 players in the starting line-up, fans were still treated to an entertaining footballing spectacle on the field through the likes of experienced players such as Can, Nico Schulz, Donyell Malen, and Salih Ozcan.

18-year-old Samuel Bamba, and Malen scored a brace, while substitutes Julian Rijkhoff and Justin Njinmah scored a goal each towards the end of the match. Dortmund’s opening goal was an own goal by Sailors’ Amirul Adli two minutes after the half-hour mark.

Gabriel Quak and Faris Ramli gave the hosts and their fans something to cheer about as the duo grabbed a goal each. “Not to go to the World Cup is disappointing, but I’m happy to be here. You play some good games, and you can just enjoy good football. That is the most important thing for me, to enjoy football wherever it is, at the World Cup or here,” shared Malen, who was not included in Netherlands head coach Louis van Gaal’s plans for Qatar.

For Sailors’ interim coach Luka Lalic, he also included several young players in his squad and allowed them to gain match experience in the latter stages of the game. “In general, the first 30 minutes we put in a good effort to keep the score at 0-0. Individual mistakes led to those goals, and halftime to be 3-0 down. The highlights were the two goals we scored were both assisted by academy players. The last ten minutes, those three goals we conceded, that’s the price we paid for the youth,” explained Lalic.

The five-time Bundesliga champions will next have a community engagement programme on Saturday morning (26 Nov), after which they will have a meet-and-greet with fans at the PUMA flagship store in Somerset from 11am to 1230pm.

Following that, Dortmund will travel by bus to Johor Bahru to take on the Johor Southern Tigers on 28 Nov and will fly to Vietnam for a match against their national team two days later.

Youths who rely on social media for news less knowledgeable about current affairs than those who read news sites, apps

Man to be charged for criminal trespass into neighbour’s home, kissing woman who was asleep