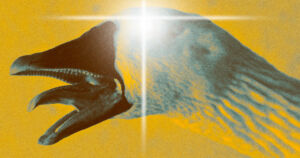 Do not fight geese. You will lose, and the geese will win. It’s science.

Research from scientists at the University of Illinois, newly published in the journal Wildlife Society Bulletin, found that standard goose “harassment” tactics are horribly ineffective at shooing — and keeping — away the notoriously human-hating birds, even if the harassment causes them to flee momentarily.

The researchers’ field work took place several years ago, during the winters of 2017 and 2018. During those seasons, they managed to equip some of the Chicago area’s wild geese with Fitbit-esque devices. Once the birds were outfitted with the trackers, the scientists proceeded to, well, really annoyingly harass them, moving towards the animals while clacking wooden boards together. They’ve been analyzing the tracking data since, and now, years later, the results are pretty clear —  and they’re apparently kind of boring.

“I thought using these Fitbit-like devices on the neck collar was a creative way to understand resting, flying, or foraging behaviors… I was very eager to see what the results were,” said Mike Ward, a professor in the Department of Natural Resources and Environmental Sciences (NRES) at Illinois and coauthor on the study, in a press release. “But when it was all analyzed, I was like, ‘Wow, that’s not too exciting.'”

“Basically, when you harass, they fly a little bit more because you’re scaring them… but it wasn’t a fundamental difference,” he added.

In other words? Geese do what they want, they do it when they want to, and if they need to, they’ll keep coming back — even if you actually manage to ruffle their feathers.

If it’s any consolation, you’re not not scary. It’s just that the geese care more about resources than a screaming human.

“When they’re not being harassed, they’re making the choice to leave the park because it’s beneficial to them — there’s a resource elsewhere they want to access,” Ryan Askren, a former Illinois doctoral student and study coauthor, said in the release. “Whereas when we’re harassing them, they probably have a biological reason to be there. There’s some sort of resource, such as food or water, and they want to be there at that moment.”

Importantly, harassment techniques aren’t just to keep the birds off private property. As explained by the scientists, geese are supposed to migrate, and it’s not a good sign if they don’t; ideally, scientists would be able to use harassment techniques to ensure that geese lingering where they shouldn’t stick to healthy migration patterns, rather than burn their much-needed energy reserves.

“If a bird is hanging around Chicago in winter, it’s probably not in good shape,” Ward said in the statement. “It’s cold and doesn’t have a lot of food.”

“The goal of harassment is never to hurt the geese, but to get them to use up energy during an already tough season, forcing them to migrate to warmer climates,” he continued. “Unfortunately, we found that doesn’t happen in practice.”

Alas, things are as we’ve long feared. Geese are simply too powerful, perhaps even too powerful for their own good. Here’s hoping scientists can maybe develop some migration-supporting harassment tactics in the future, but for any non-scientists out there who just don’t want them pecking at the landscaping: lay down your metaphorical sword and surrender. It’s just not worth it.

More on animals doing what they want: Court Rules That Legally, Bees Can Be Classified as Fish