Let’s just take a moment to admire how amazing it is when science fiction becomes routinely real:

SpaceX CEO Elon Musk shared this amazing drone footage of the Falcon 9 rocket’s first stage returning for a perfect landing after the launch of the Dragon capsule to the International Space Station. It drops flawlessly through the clouds, easy as pie, touching down at SpaceX’s Landing Zone 1 at Cape Canaveral.

As cool as the first stage landing was, the launch had a notable starting place. As our Ken Kremer reported yesterday, “the era of undesired idleness for America’s most famous launch pad was broken at last by the rumbling thunder of a SpaceX Falcon 9.” The SpaceX launch took place on the historic Launchpad 39-A, the same spot where Apollo astronauts began their journey to the Moon and space shuttles set off on their missions.

Here’s another view of drone footage of the landing:

SpaceX’s CRS-10 resupply mission to the International Space Station was the second successful launch for the commercial space company since the launch pad explosion in September 2016. Dragon will rendezvous and be docked to the ISS, on Wednesday, March 22, bringing about 5,500 pounds of supplies and experiments. 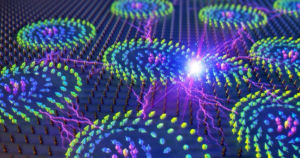