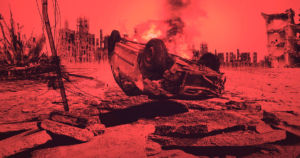 Earlier this month, researchers from Australia’s Breakthrough National Centre for Climate Restoration published research containing a dire warning: reverse climate change or face the end of human civilization as we know it.

Now, in an interview with GQ, researcher David Spratt specifically calls out political and economic leaders for turning a blind eye to the ongoing crises of global climate change, for refusing to act and maybe nip the problem in the bud. Spratt commends activists, but said that they alone can’t save the world unless change happens higher up.

“I think the community is organizing and doing its best, but its leaders are failing them, almost absolutely,” he said.

In the interview, researcher David Spratt argues that we are well on our way toward a future where total societal collapse is followed by widespread war and famine, thanks to global leadership failing to address the problem.

“I think you have to go back to the political and business elite, who have an opportunity to lead on these issues, because those are the voices that are predominantly reflected in the media,” Spratt told GQ. “That’s the way it works. And they have chosen to turn a blind eye to this. They have chosen not to exercise leadership on this.”

More on climate change: Pope to Oil Execs: “Energy Use Must Not Destroy Civilization”