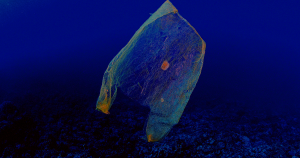 On May 1, explorer Victor Vescovo broke the world record for deepest ocean dive by a human in a submarine when he reached a terrifying depth of nearly 10.9 kilometers (6.8 miles).

But what should have been a wholly celebratory moment soon turned bittersweet.

That’s because amongst the pristine beauty of the Mariana Trench’s seafloor, Vescovo noticed what he believes was a plastic bag and some candy wrappers — disturbing confirmation that human pollution now reaches even the most remote corners of our planet.

Vescovo completed the deep sea dive as part of a mission called the Five Deeps Expedition, through which he plans to explore the deepest points in all five of the world’s oceans.

According to Reuters, he’s hopeful his trash discovery will raise awareness about ocean pollution — and perhaps even encourage governments to do something about it.

“It wasn’t completely surprising, although it was very disappointing to see obvious human contamination of the deepest point in the ocean,” Vescovo said in an interview with the news agency, later adding that the ocean is “not a big garbage collection pool, even though it’s treated as such.”

More on ocean pollution: Shocker: Efforts to Make Oceans Cleaner Are Working (When You Aren’t Sabotaging Them)

This bizarre Japanese flying bike screeches like an eagle and… hovers?