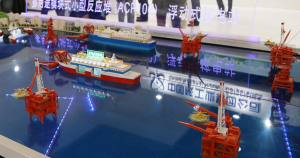 Later this year, China will begin to construct floating nuclear power plants that could be used to bring power to distant, artificial islands in the South China Sea.

Floating nuclear reactors sound perilous, but the China National Nuclear Corp plans to develop them as a cheaper alternative to transmitting power from mainland China, according to the Asia Times — and officials confirmed that a prototype reactor is already being tested near the coastline of China’s Shandong province.

With construction starting this year, according to the Asia Times, China’s first fully-functional floating nuclear reactor should be seaworthy by 2021.

And it’s not the only country interested in similar tech. Russia’s floating nuclear power plants are expected to head up to the Arctic Circle later this year.

If China wants to use floating reactors to power the entirety of its artificial islands in the South China Sea, it’ll need to construct about 20 in total, according to Asia Times.

But even beyond that, if the nuclear barges do what they’re supposed to, China may construct even more to provide power for its offshore fossil fuel extraction facilities.

The post China Is Building up to 20 Floating Nuclear Power Plants appeared first on Futurism.

Biologists have studied enzymes that help wheat to fight fungi