Do you welcome the extra evening light of the Full Moon, or curse the additional light pollution? Either way, this week’s Full Moon on Friday April 22nd is special. It’s the smallest Full Moon of 2016, something we here at Universe Today have christened the Mini-Moon.Mini-Moon 2016: This year’s Mini-Moon falls on April 22nd at 5:25 Universal Time (UT), just 13 hours and 19 minutes after lunar apogee the evening prior at 16:06 UT on April 21st. Though apogee on the 21st is 406,350 km distant – a bit on the far end, but the third most distant for the year by 300 km — this week’s Full Moon is the closest to apogee for 2016 time-wise. The 2015 Mini-Moon was even closer, in the 10 hour range, but you’ll have to wait until December 10th, 2030 to find a closer occurance.What is the Mini-Moon, you might ask? As with the often poorly defined Supermoon, we like to eschew the ambiguous ‘90% of its orbit’ definition, and simply refer to it as a Full Moon occurring within 24 hours of lunar apogee, or its farthest point from the Earth in its orbit.Fun fact: the 29.55 day period from perigee to perigee (or lunar apogee-to-apogee) is known as an anomalistic month.Thank our Moon’s wacky orbit for all this lunacy. Inclined 5.14 degrees relative to the ecliptic plane, the Moon returns to the same phase (say, Full back to Full) every 29.53 days, known as a synodic month. The Moon can appear 33.5′ across during perigee, and shrink to 29.4′ across near apogee.And don’t fear the ‘Green Moon,’ and rumors going ’round ye’ ole internet that promise a jaded Moon will occur in April or May; this is 100% non-reality based, seeking to join the legends of Super, Blood, and Full Moons, Black and Blue.The April Full Moon is also known as the Full Pink Moon to the Algonquin Indians. The April Full Moon, can, on occasion be the Full Moon ushering in Easter (known as the Paschal Moon) as per the rule established by the 325 AD council of Nicaea, stating Easter falls on the first Sunday after the first Full Moon after the fixed date of the Vernal Equinox of March 21st. Easter can therefore fall as late as April 25th, as next occurs on 2038. The future calculation of Easter by the Church gets the Latin supervillain-sounding name of Computus.Of course, the astronomical vernal equinox doesn’t always fall on March 21st, and to complicate matters even further, the Eastern Orthodox Church uses the older Julian Calendar and therefore, Easter doesn’t always align with the modern western Gregorian calendar used by the Roman Catholic Church.The Moon can create further complications in modern timekeeping as well.Here’s one wonderful example we recently learned of in our current travels. The Islamic calendar is exclusively based on the synodic cycle of the Moon, and loses 11 days a year in relation to the Gregorian solar calendar. Now, Morocco officially adopted Daylight Saving (or Summer) Time in 2007, opting to make the spring forward during the last weekend of March, as does the European Union to the north. However, the country reverts back to standard time during the month of Ramadan… otherwise, the break in the daily fast during summer months would fall towards local midnight.You can see a curious future situation developing. In 2016, Ramadan runs from sundown June 5th, to July 4th. Each cycle begins with the sighting of the thin waxing crescent Moon. However, as Ramadan falls earlier, you’ll get a bizarre scenario such as 2022, when Morocco springs forward on March 27th, only to fall back to standard time six days later on April 2nd on the start of Ramadan, only to jump forward again one lunation later on April 30th!Morocco is the only country we’ve come across in our travels that follows such a convoluted convention of timekeeping.Fun fact #2: the next ‘Mini-Moon’ featuring a lunar eclipse occurs on July 27th 2018.And the Spring Mini-Moon sets us up for Supermoon season six months later this coming October-November-December. Though lunar perigees less than 24 hours from Full usually occur as a trio, an apogee less than 24 hours from Full is nearly always a solitary affair, owing to the slightly slower motion of the Moon at a farther distance.Don’t miss the shrunken Mini-Moon rising on the evenings of Thursday April 21st and Friday 22nd, coming to a sky near you.

The post April Lunacy: Getting Ready for the Full ‘Mini-Moon’ appeared first on Universe Today. 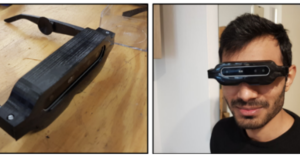 New Device Lets People Who Are Blind “See” in Infrared