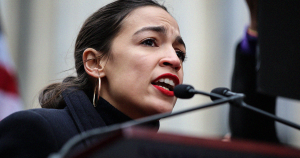 The impact of climate change will be felt long after those currently living on Earth take our final breaths. In fact, the effects — high temperatures, extreme weather events, poor air quality — will likely be far worse for future generations.

According to Rep. Alexandria Ocasio-Cortez, that’s forcing many young people to reconsider whether or not they should have children.

During a recently posted Instagram Live video, Ocasio-Cortez questioned the morality of having children in the face of climate change.

“Our planet is going to hit disaster if we don’t turn this ship around, and so it’s basically like, there’s a scientific consensus that the lives of children are going to be very difficult,” she said. “And it does lead, I think, young people to have a legitimate question, you know, ‘Is it okay to still have children?’”

Parents and future parents aren’t the only ones who should be concerned about the impact of the planet’s health crisis on future generations, though. “Even if you don’t have kids, there are still children here in the world,” Ocasio-Cortez said, “and we have a moral obligation to them, to leave a better world for them.”

Ocasio-Cortez isn’t the first public figure to wonder whether it’s ethical to reproduce in the face of looming ecological catastrophe. As for how we can shape that better world, addressing climate change will take more than admitting we have a problem, according to Ocasio-Cortez.

READ MORE: Alexandria Ocasio-Cortez Says It Is ‘Legitimate’ for People to Not Want Children Because of Climate Change [The Independent]

More on AOC: “Green New Deal” Calls for a Zero-Emission America by 2030

The post AOC: Facing Down Climate Change, Should We “Still Have Children?” appeared first on Futurism.

Climate Change Is Thawing out the Corpses on Mt. Everest